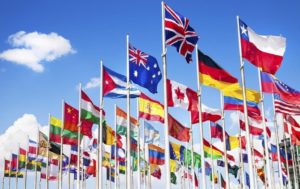 2016 ended a little breathlessly – like we were waiting to exhale, hoping to avoid one last tragedy in the final hours. 2017 is off to a choppy start, too, and maybe this feeling is going to be very familiar over the coming months.

Like many of you, I’ve been trying to understand what is happening in our world and in our country, trying to process recent events, guess what is coming, and most importantly – determine how my work and my life can have the most positive impact.

The paradigm has shifted. But how?

Saturday’s Wall Street Journal offered some footing (“We Are Not The World” Jan 6) and the gist is that the political divides that we are so accustomed to – right versus left, conservative versus liberal, Democrat versus Republican – are sooo last century. This makes sense, especially when people on both sides of the aisle seem equally bewildered.

Greg Ip argues that the real divide is between Globalization and Nationalism, free trade, open borders, and multicultural interests versus national unity, identity and way of life. Nationalism is not a left or a right ideal – it can actually be both – just as globalization has been embraced by Democrats and Republicans alike, almost unquestioningly, since at least World War II.

Ip’s essay took me back to my undergraduate days and a fascinating class that I took on nationalism. The course was based on a text called Imagined Communities: Reflections on the Origins and Spread of Nationalism by Benedict Anderson (1995 revised edition). It had such an impact on me that I still have the book (ok, well I’m also sort of a book packrat, but still.) In class, I was startled to learn that nationalism itself was not that old of an idea and that it could take so many forms. Prior to Anderson, nationalism was seen as a negative – it drove people to war and genocide and gave voice to racism and xenophobia. Anderson recognized that there was also a hopeful side to nationalism.

“In an age when it is so common for progressive, cosmopolitan intellectuals (particularly in Europe?) to insist on the near-pathological character of nationalism, its roots in fear and hatred of the Other, and its affinities with racism, it is useful to remind ourselves that nations inspire love, and often profoundly self-sacrificing love,” Anderson wrote in Imagined Communities. “The cultural products of nationalism—poetry, prose fiction, music, plastic arts—show this love very clearly in thousands of different forms and styles.”

I appreciate this frame. We all know that the things that face us do not have easy answers and the Other cannot be understood in simple terms. It will be important to not just remember that balance exists – but to search it out, to try to understand it, to know the truth is never as simple as we want it to be.

I don’t have any answers yet – what do you think? Does this resonate for you?